Over the years I’ve read many books on sales methodologies and techniques. Inevitably the last chapter of each of these books is entitled “Closing the Sale.” The concept of “closing” the sale is one that has entered the language, and the mindset, of just about everyone involved in the sales process. The epitome of this mindset can be seen in Alec Baldwin’s portrayal of the sales trainer from hell in the film Glengarry Glen Ross. Alec Baldwin, as Blake, reviews the ABC’s of selling (Always Be Closing):

Webster’s dictionary defines the word ‘close’ as “to bring to an end or period.” If we think of the customer’s purchase as “closing the sale,” then we’re saying that’s the end of the relationship with the customer. In 2009 the British Financial Times conducted a survey that found it costs seven times more to locate and sell to a new customer than it does to sell to an existing one. More recently a Gartner Group study found 80 percent of your profits will come from just 20 percent of your existing customers. This is why it’s so important to think of the sale not as the close of a transaction, but as the beginning of a partnership; not as a one-night stand, but as the start of a long-term relationship. 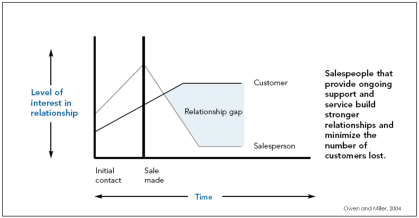 For luxury retailers, this “gap” can become a fertile time frame in which to build and nurture the customer relationship. As a customer, I may not expect to hear from, or think to seek out, a particular sales associate from Walmart or Target. And yet I would not be at all surprised to receive a hand-written thank-you note from a Cartier associate, or to find myself returning to the Dior salesperson who helped me find that beautiful jacket.

Note: For an updated version of the ABC’s of persuasive selling, read Daniel Pink’s fantastic book To Sell is Human:

One thought on “Never Be Closing”